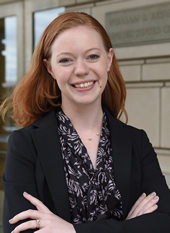 Krystal Swendsboe '15L
Krystal Swendsboe grew up in the Black Hills of South Dakota and is a 2010 graduate of Patrick Henry College. Krystal served as one of the first Managing Online Editors to the Washington and Lee Law Review, a Davis Appellate Advocacy Competition Administrator, and is a member of Omicron Delta Kappa.

Who will you be clerking for, and what will your responsibilities be?

I will be clerking for Judge Mark S. Davis from the District Court for the Eastern District of Virginia in Norfolk, Virginia. I am the only term clerk for the 2015-2016 term, and I will join Judge Davis' career clerk in reviewing cases, drafting bench memos and opinions, and assisting Judge Davis on the bench. The Eastern District Court for Virginia is one of the fastest moving trial courts in the U.S., and I will be assisting with anything from civil contract and tort claims, to intellectual property matters, to criminal and admiralty cases.

Like any law student, I enjoy researching legal problems and writing. Prior to law school I worked as a litigation paralegal, and I enjoyed writing trial briefs and researching case law. Once I entered law school, I received additional opportunities to research trial issues, draft bench memos, and engage in oral advocacy. Between my class work and two internships at the District Court for the District of Columbia, I knew that my interest in research and writing on a number of different subjects naturally pointed me towards clerking.

How did you secure this clerkship?

Which W&L classes and/or experiences do you think were most helpful in preparing you for clerking?

I had a number of experiences that helped to prepare me for my clerkship. I was very lucky to have two internships in the D.C. District Court during my time at W&L. These internships were very helpful in preparing me for a clerkship because both allowed me to research trial issues, draft opinions for District Court judges, and receive feedback on those opinions. I also had the good fortune to write a Note for my journal and, with Professor Shaughnessy's help, I had to explore the nuances of federal trial practice. This extensive research project allowed me to dig into federal trial procedure and familiarize myself with a common procedural problem in federal court. Finally, as a Davis Competition Administrator, I got to help write an appellate advocacy problem for competition. It was very challenging to draft and edit a District Court opinion and an Appellate Court opinion that competitors would use to argue the competition problem. This project made me acutely aware of the difficulty in writing trial and appellate opinions, and I hope I am a better and more careful writer because of that experience.

How is clerking linked to your career objectives?

Long term, I hope to be a litigation attorney practicing in the Eastern District of Virginia. I think clerking in the EDVA will give me a great boost in that direction because I will have a unique opportunity to see how attorneys practice and what good and bad litigation attorneys do. I think clerking will also make me a better attorney because I will have learned to think, at least a little bit, like a judge.

What are you most looking forward to about this clerkship position?

As ridiculous as it sounds, I am really looking forward to chatting with Judge Davis about civil procedure and the challenging legal cases he hears. I truly enjoy learning new things about the law, talking about legal cases, and working through legal problems. Some of my favorite memories of law school involve deep conversations about complicated legal arguments (i.e. when does a post-accident move influence what law is applied in a case? Or is there a "silver platter" concern in the 6th Amendment context?). I hope that my clerkship gives me new legal issues to be excited about and a group of people with whom I can share my excitement about the law.