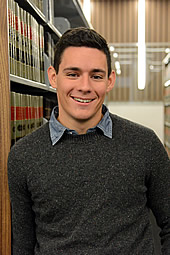 Paul Judge '16L
Paul Judge '16L went to the College of William and Mary in Williamsburg, Virginia and commissioned as a 2nd Lieutenant out of ROTC. He is now a 1st Lieutenant in the United States Army. He will enter the Army JAG Corps following his clerkship.

Who will you be clerking for, and what will your responsibilities be?

I'm clerking for Judge Margaret Ryan at the Court of Appeals for the Armed Forces. I will work with two other clerks assisting her by writing draft opinions for all of the cases that come before CAAF, a five-judge federal appellate court that deals with a mostly criminal docket. CAAF is the highest military appellate court in the country and its decisions can only be appealed to the U.S. Supreme Court.

First, clerking is a mark of prestige on a resume. Pick any lawyer in a position of prestige or power in the federal government and most of the time you'll find that they have one or two federal clerkships in their background. Second, I'm clerking for a judge in Christiansburg right now, and I have loved it. Getting a behind-the-scenes look about how a judge thinks and operates is invaluable experience, and a clerkship is really the only way to get it.

How did you secure this clerkship?

Andrea Hilton in Career Services told me that some judges on CAAF were accepting applications for clerks. I mailed in my application and interviewed in November. The interview was pretty relaxed, and I was offered the job on the spot.

Which W&L classes and/or experiences do you think were most helpful in preparing you for clerking?

CAAF deals almost exclusively with criminal appeals, so all of my criminal procedure classes will be helpful. I would not want to clerk for any appellate court, however, without having taken Federal Jurisdiction and Procedure and Conflicts of Laws. Those classes gave me the tools to understand some of the more complicated procedural issues that appellate courts often wrestle with.

What are you most looking forward to about this clerkship position?

I love discussing legal issues and hate working in a solitary environment. My favorite part about the law is chewing over tough legal issues with other smart, passionate lawyers. I look forward to doing that with Judge Ryan and my fellow clerks.

What are your plans after your clerkship?

I have been accepted to serve in the US Army Judge Advocate General Corps.