Haley White ‘15L Learning the Difference between Winning and Justice 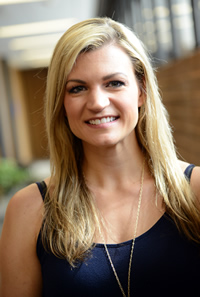 Haley White '15L
Broad shouldered and standing well over six feet tall, Edward Saunders is an imposing figure. He is also a compelling speaker, and his oratory gifts were on full display earlier this year when he testified in Roanoke circuit court that the plea deal he accepted in 2012 was coerced.

Saunders, who is serving 20 years for a 2014 conviction for aggravated sexual battery, was back in court arguing that the 44 years suspended from the earlier plea deal should not be tacked on to his sentence. In dramatic fashion, he claimed his defense counsel was ineffective and he was forced to sign a plea deal in the 2012 case for something he did not do.

"He even had me almost convinced," says Washington and Lee third-year law student Haley White '15L.

White, who participated in W&L Law's public prosecutors externship program this year, was there to argue on behalf of Commonwealth's Attorney's office that the 2012 sentence should be reinstated in full for the probation violation. Though not her first time in court, this was definitely the biggest case so far during her year gaining real courtroom experience.

White recalls the first days on the job back in the fall. She and the other externs spent one day observing court and the next day were handed files for cases on the docket that same day. In a preliminary hearing on a shoplifting charge, she presented evidence and testimony, and the case was certified to circuit court.

"We told the Commonwealth's attorney, Don Caldwell, that we won," White says. "That was first time of many that he reminded us, 'This is not about winning. It's about justice.'"

This lesson stands out among the many White learned during her time in the office, where she worked on everything from grand larceny to bond hearings. When she wasn't honing her own courtroom skills, she was observing, seeing both very good and very bad attorneys in action. Along the way, she was developing the confidence she would soon call on for her biggest case. 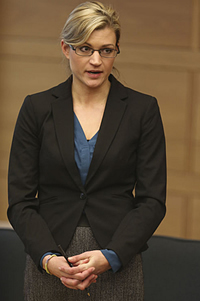 White had enjoyed the externship so much that she stayed on in the spring as a service project, and it was then that she was assigned to the Saunders' case. Appearing before Judge William Broadhurst, known for his conservative approach to sentencing, White argued that because of the gravity and similarity of the crimes, both of which involved sexual assault of minors, the entire 44 years suspended from the original conviction should be added on to Saunders' sentence.

Now facing six decades in prison, Saunders continues to appeal both the 2014 conviction and the 2012 plea deal.

White, originally from Benton, Louisiana, will graduate this May. Her experience in the Public Prosecutor's program has solidified her desire to be a criminal prosecutor. She is seeking a district attorney position in North Carolina, armed with the confidence and skill that can only come from real practice experience.