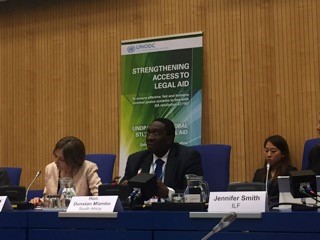 Judge Dunstan Mlambo speaking on strengthening access to legal aid at a side session of the CCPCJ.
In the Spring 2016 Access to Justice Practicum third year students Boris Bindman, Karen Jacobsen, Jacob Ventura and Alexander Miltenberger began the term by composing a draft resolution to be proposed at the United Nations. The class also had input from public defenders at the Israeli Public Defender's Office. The resolution aimed to establish the framework for a network where public defenders worldwide could share information between countries to aid in the defense of their clients. The draft resolution also aimed to encourage countries to promote the network and encourage public defenders to join and utilize this tool for international cooperation.  The goal was to have the resolution proposed in May of this year at the Twenty-fifth Session of the Commission on Crime Prevention and Criminal Justice ("CCPCJ") to be held in Vienna.

Simultaneously the class also worked on the creation of a website that could serve as a model for the global network described in the resolution. Led by Karen Jacobsen, a website was created where public defenders and legal aid providers can join and search for participating colleagues around the world. The network is called the Mutual International Legal Defense Network ("MILDN") and the website recently went public at www.mildn.org. As an example of how the website works, a public defender in France may want to raise a cultural defense for a client from Afghanistan, but does not have the resources to obtain informational resources about Afghan's cultural norms. MILDN.ORG would allow this French public defender to find and connect with an Afghan public defender who can provide the information or aid in locating the needed information for the defense.