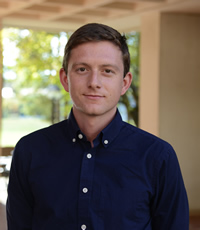 Jonathan Murphy '18L
First year law student Jonathan Murphy '18L and fellow 1L Luisa Hernandez had the unique opportunity to present a paper this year at the London School of Economics, in the process of petitioning the World Bank to investigate human rights abuses in Ethiopia. Below, Jonathan describes the project and this ongoing crisis.

In October 2015, Washington and Lee Research Fellow Gabisa Henok reached out to  Luisa and me to inquire about our interest in filing a "Request for Inspection" with the World Bank Inspection Panel. The Request would focus on human rights abuses occurring in Ethiopia over the implementation of the national "Integrated Development Plan" (2013-Present).

The Plan required the forced displacement (without compensation or resettlement) of thousands of Oromo people around the capital city of Addis Ababa. Responding to the early phases of the unconstitutional land grabbing, Oromo protestors gathered to decry what they felt was one more step in the historic ethnic marginalization of the Oromo people by the Ethiopian government. These protests were met by violence from the Ethiopian military, leading to the deaths of hundreds of Oromo and the arbitrary imprisonment of thousands more. Since November 2015 alone, Human Rights Watch has reported that more than 200 Oromo protestors have been killed.

Students at Washington and Lee are partners in the Global Forum on Law, Justice, and Development through the World Bank. This was a tremendous asset as we began the process of requesting an inspection from the Inspection Panel because of the research resources that we had access to as a result.

On January 13th the news broke that the Ethiopian Government was suspending the implementation of the development plan in response to the unrest it had caused and the international outcry that had occurred. This appeared to be tremendous news that would make our Request for Inspection no longer necessary, but would also require significant changes to our paper. I was personally concerned about our paper's relevance after the plan was suspended. However, the protests and the killings continued and are still ongoing, as the concerns of the protesters ran much deeper than the plan itself (and because the land grabbing had continued).

The abstract for our paper was accepted in February for presentation at the London School of Economics, conditioned upon the paper's completion by late March. With the help of Professor Seaman, Professor Eggert, Professor Mart-Rice, and a number of fellow students, we were able to complete the paper. From expropriation laws and bilateral investment treaties to presentation feedback and bluebooking tips, the faculty and students at Washington and Lee all contributed significantly to the completion of the paper. 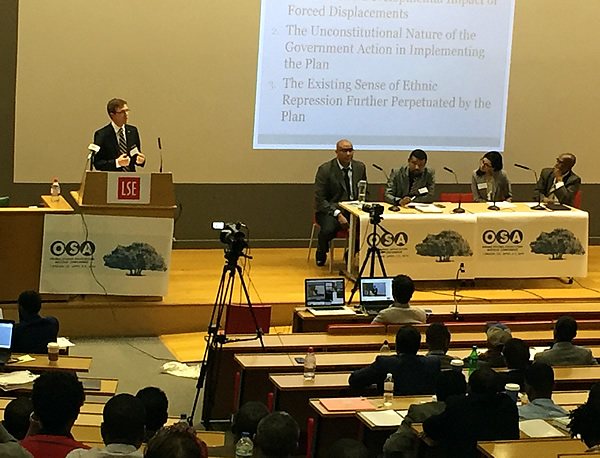 Jonathan Murphy presents at the London School of Economics

The Transnational Law Institute at Washington and Lee supported our trip to London, making it affordable and possible with our ongoing classes. In London, we were able to share a podium with many of the scholars and journalists we had cited in our own paper as we presented on the counter-developmental impact of the Plan on the Oromo. The trip was a tremendous learning experience that provided life-long memories. We would like to thank Professor Drumbl and Henok Gabisa in particular for their support in making this possible.

You can watch Jonathan's  and Luisa's presentations beginning at 2:47:50 at this link: https://www.youtube.com/watch?v=in-6-E-TUjs