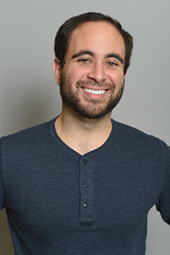 Oscar Molina '15L
Oscar R. Molina, 15L, is from Miami, FL. He graduated from the University of Florida in 2011 with a Bachelor of Arts in Criminology and a Bachelor of Sciences in Psychology. This past academic year he was a student attorney in the Immigrant Rights Clinic and a Law Ambassador. After graduation, Oscar will be moving to Wilmington, DE to clerk for the Honorable Mary M. Johnston, 84L, of the Superior Court of Delaware for the 2015-2016 term.

When I was first asked to write a piece on my experience at W&L Law, I didn't exactly know what to reflect on. Would I mention the time my 1L Torts professor lost a friendly bet against me and was forced to wear Grouch Glasses for class one day? Would I mention that Judy Clarke, the Judy Clarke, was my Evidence professor? Or would I mention the lifelong friends I've made along the way? So I decided to begin from the moment I found out I was going to law school.

When I first told my family and friends that I had been accepted into W&L Law, their immediate response was "Congratulations!" Once their smiles faded, they then followed up by asking, "Is that an actual school? Where is that even located?" At the time, I would simply respond, "It's a small school, in a small town." To tell you the truth, attending a small school in a small town was something that I never even considered. I decided to take the risk, and I'm glad I did.

This saying is equal parts true as it is equal parts false.  On the first day of class, my classmates and I were anxiously waiting for my small-section professor to enter the classroom and begin lecturing. As he walked into the classroom, without even closing the door behind him, one of my classmates was cold called. Immediately, I felt the anxiety rising within the classroom. Roughly two hours later, class finally ended. I had survived my first law school class.

Though the cold calling culture does exist in W&L Law, as it does in all law schools, the idea of personable and supportive professors is one that goes unmatched. Not many professors would wear Grouch Glasses during one of their lectures following a friendly bet, or have class out on the law school lawn just because it looks nice out. Outside of the classroom, W&L professors stand firm on their "Open Door Policy." I still remember chatting with my Transnational Law professor, Professor Miller, about questions concerning classroom material and college football. Some professors would even willingly meet with a student in Miami during winter break to discuss a writing sample.

It was also during the first year that I began to meet my lifelong friends. W&L's small size has given me the opportunity to truly get to know my classmates by who they are, and not just by their names. The same friends that laughed at me as I stared in awe watching my first ever snow fall, were also the same friends who supported me following the loss of a loved one. The first year can scare you, but you will never feel alone at W&L.

Beginning in my second year, I took a heavy course load while participating in the Moot Court Competitions. One of the most interesting classes I took was Evidence, taught by Professor Clarke. Professor Clarke is a criminal defense attorney who has defended the likes of Theodore Kaczynski, Eric Rudolph, Jared Lee Laughner, and currently Dzhokhar Tsarnaev. Though her background may seem intimidating, as most W&L professors' backgrounds can be, she was always willing to chat with students about class and life in general. As for the Moot Court Competitions, I participated in the Negotiations, Davis (Oral Advocacy), and Client Counseling competitions. Be it negotiating a settlement offer for your client, or arguing a brief that you wrote in front of Justices, the overall experience proved to be quite helpful.

My fondest memory from my second year was going on a trip to DC with my friend, Ember Eyster, and her girlfriend, Andria Jensen, to run the Rock 'n' Roll DC Half Marathon. Although law school can be demanding, I was still able to make the time to train for the half, and take a trip to DC for a weekend. Following the race, I then began training for the Chicago Marathon for which I ran this past October in honor of my friend and for the American Foundation for Suicide Prevention.

Truth is, the third year at W&L is anything but boring. During the first two weeks of fall and spring semester, students participate in Immersion. Immersion is a fast paced, simulated practical lawyer experience. During the fall, I played the role of an attorney for a civil trial, and played the role of a witness for my friend's civil trial. I learned how to draft certain motions, and how to file them with a court. I also learned the intricacies that go behind appearing in front of a court as an attorney. During the spring, my co-counsel and I represented a company in a mergers and acquisitions setting. This transactional experience featured my co-counsel and I drafting agreements and negotiating a deal with opposing counsel. Though these two weeks were demanding, I also found them to be rewarding. In reality, it was through Immersion that I learned I did not want to practice litigation.

Outside of Immersion, I have been able to extern at a small firm in Roanoke, and am currently enrolled in the Immigrants Rights Clinic. Through the small firm, I was able to interact with clients on a continuing basis, work on assignments in regards to client cases, and even attend a trial with my supervisor. As for Clinic, most of my family members are immigrants from Nicaragua. So I felt compelled to assist those who are trying to become legal residents and citizens of the United States. In the eyes of my Clinic clients, my co-counsel and I are their attorneys. We have spent a significant amount of time meeting with our clients, and preparing their cases for trial. We have developed case strategies, have drafted declarations, memoranda, and affidavits, and are currently preparing them for their custody and SIJS hearings coming up next month.

So much has happened the past three years, and I cannot believe that it has come to an end. At times I catch myself thinking about the life I'm leaving behind--law school football in the fall, building a snow wall outside my friend's door in the winter, hiking nearby trails, participating in the Mr. W&L Law pageant, and having a family when mine is 900 miles away.

W&L Law has been an experience unlike any other. I can go on writing about W&L Law forever, but I feel you should come and experience first hand the beauty of this institution.