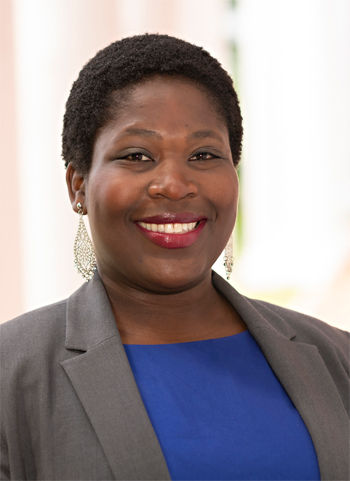 Carla Laroche (she/her) has dedicated her career to increasing access to justice and opportunities for systemically excluded communities. She is an assistant clinical professor at Washington and Lee University School of Law. Professor Laroche developed and directs the Civil Rights and Racial Justice Clinic. Her scholarship addresses the intersection between mass incarceration, gender, and families.

Prior to joining W&L, Professor Laroche was a clinical professor at Florida State University College of Law, where she founded and directed the Gender and Family Justice Clinic. While at FSU, she was the sole inaugural recipient of the FSU 2020-21 Community Engaged Teaching (Graduate) Award. Previously, Professor Laroche served as a criminal justice reform law fellow at the Southern Poverty Law Center in Florida, a pro bono fellow at Hunton Andrews Kurth LLP, a federal law clerk in the Southern District of Florida for the Honorable Donald M. Middlebrooks, and an associate at Paul Hastings LLP.

A first-generation Haitian-American, Professor Laroche earned her JD from Columbia Law School; Master's in Public Policy from Harvard Kennedy School; and A.B. in History, with a certificate in Women and Gender Studies, from Princeton University. She received the National Bar Association's 40 Under 40, the Excellence in Activism, and the Young Lawyers Division's Humanitarian Awards. Professor Laroche was also named an American Bar Association On the Rise - Top 40 Young Lawyer and co-chairs the ABA Criminal Justice Section Women in Criminal Justice Task Force. The Tallahassee Democrat named her one of the 25 Women to Know in 2021.