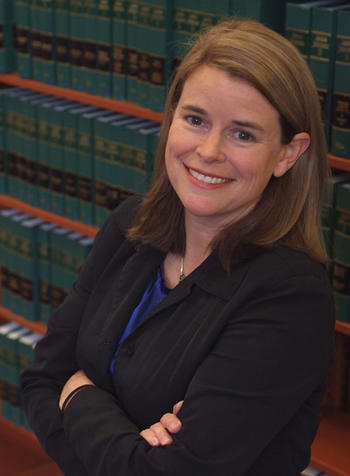 Johanna Bond is the Sydney and Frances Lewis Professor of Law at Washington and Lee University School of Law. An expert in international human rights law and gender and the law, Bond joined the W&L law faculty in 2008. Her forthcoming book, Global Intersectionality and Contemporary Human Rights, will be published by Oxford University Press in 2021. Bond's scholarship has appeared in the Southern California Law Review, the Emory Law Journal, the Columbia Journal of Gender and Law, the Yale Human Rights and Development Law Journal, and many other journals and other outlets. Bond was twice selected as a Fulbright Scholar, first in 2001 and again in 2015. In 2001, her Fulbright award enabled her to travel to Uganda and Tanzania to conduct research that resulted in her edited book, Voices of African Women: Women's Rights in Ghana, Uganda, and Tanzania (Carolina Academic Press, 2005).

Professor Bond previously served as the Associate Dean for Academic Affairs. As part of a small senior leadership team, she helped to position the school for continued success. Bond has worked to make the promotion of diversity, equity, and inclusion at the law school an institutional priority. Bond is an affiliate faculty member of the Women's, Gender and Sexuality Studies Program and the Africana Studies Program. She served on the Presidential Search Committee, the Provost Search Committee, the Law Dean Search Committee, and a number of other university-wide committees. Bond also served as the only law school representative on the President's Strategic Planning Steering Committee and served as Chair of that Committee's Sub-committee on Diversity, Equity, and Inclusion.

Professor Bond teaches the International Human Rights Practicum, Gender & the Law, and Torts. In her International Human Rights Practicum, students partner with Tanzanian lawyers to conduct fact-finding investigations and advocate on behalf of human rights victims. Highlights of her work beyond the classroom include organizing a group of students to accompany her to provide legal and humanitarian services to migrants at the US/Mexico border in Tijuana, Mexico in December 2018 and organizing a two-day visit to campus for Justice Ruth Bader Ginsburg on the 20th anniversary of her decision mandating the admission of women to the Virginia Military Institute (VMI) in February 2017.

Before coming to W&L, Professor Bond was an Associate Professor of Law at the University of Wyoming and a Visiting Associate Professor of Law at Georgetown University Law Center.  She also served as the Executive Director of the Women's Law and Public Policy Fellowship Program, a non-profit organization housed at Georgetown. Bond's human rights experience includes substantial travel and collaboration with non-governmental organizations and human rights lawyers around the world. She also served as a law clerk for United States District Judge Ann D. Montgomery in Minnesota. Bond graduated from Colorado College and the University of Minnesota, where she earned a J.D. and a master's degree in Public Policy. She also holds an LL.M. from Georgetown University Law Center.

Women's Rights, Customary Law and the Promise of the Protocol on the Rights of Women in Africa, in The Future of African Customary Law (Jeanmarie Fenrich, Paolo Galizzi, & Tracy Higgins, eds., Cambridge University Press, 2011).

A Decade After Abu Ghraib:  Lessons in "Softening Up" The Enemy and Sex-Based Humiliation, 31 Journal of Law and Inequality 1 (2012).

Victimization, Mainstreaming, and the Complexity of Gender in Armed Conflict, 11 Santa Clara Journal of International Law 257 (2012).

Pluralism in Ghana: The Perils and Promise of Parallel Law, 10 Oregon Review of International Law 391 (2008).

Intersecting Identities and Human Rights:  The Example of Romani Women's Reproductive Rights, 5 Georgetown Journal of Gender and the Law 897 (2004).

W&L Law's Sydney and Frances Lewis Professor of Law, dives into the world of human rights, highlighting the justice reforms achieved by nonprofits with which she works. She explains some of the common threads linking violence against women around the world, how social justice compares to other forms of justice, and what work needs to be done to help women and families from the U.S. to Uganda, as well as how we can all get involved.
Recorded May 15, 2020Airs July 7, 2020

Justice Ruth Bader Ginsburg made a joint visit to W&L Law and VMI noting the anniversary of her majority opinion in U.S. v. Virginia, a case which opened VMI's doors to women. Johanna Bond introduces Justice Ginsburg before a crowd of approximately 4,000 people.