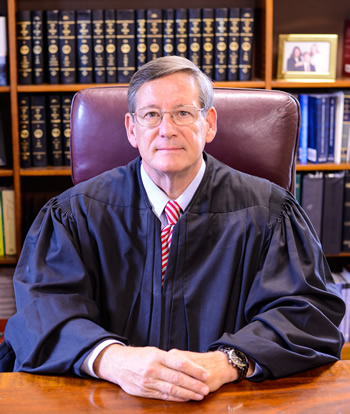 Donald W. Lemons is Chief Justice of the Supreme Court of Virginia.  A distinguished jurist and legal educator, Chief Justice Lemons has served as a judge or justice at every level of the judiciary in Virginia and, in addition to Washington and Lee University, he has taught at the law schools at the University of Virginia and the University of Richmond.  He is a national leader in numerous legal and civic organizations, including the American Inns of Court, an organization that brings together legal practitioners of all levels to improve the skills, professionalism and ethics of the bar and bench.  He served as the President of the American Inns of Court from 2010-2014.

Chief Justice Lemons graduated from the University of Virginia School of Law in 1976 and served as an assistant dean and assistant professor of law at the law school for several years.  After a successful career in private practice, Lemons was appointed in 1995 to the Circuit Court for the City of Richmond by Gov. George Allen.  In 1998 Lemons was elected by the Virginia General Assembly to the Court of Appeals of Virginia and then to the Supreme Court of Virginia in 2000.  He also served as the John Marshall Professor of Judicial Studies at the University of Richmond law school from 2005-2007.  He has been the Distinguished Professor of Judicial Studies at Washington and Lee's School of Law since 2007.  Chief Justice Lemons was named a Jessine Monaghan Fellow for the 2015-16 academic year.  He is also the 2016 recipient of the William R. Rakes Leadership in Education Award from the Virginia State Bar.