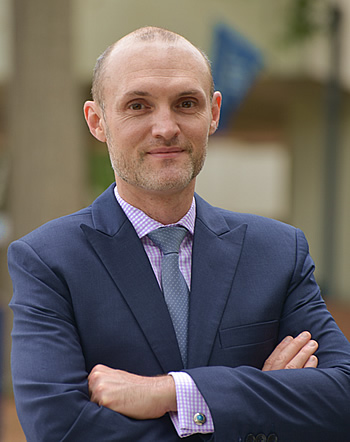 Alan M. Trammell teaches and writes primarily in the fields of civil procedure, federal courts, and conflict of laws. He is recognized as one of the leading authorities on nationwide injunctions and has been invited to present his research at numerous conferences and on podcasts. His scholarship has appeared in the Virginia Law Review, the Cornell Law Review, the Texas Law Review, and the Vanderbilt Law Review.

Professor Trammell earned his law degree from the University of Virginia where he was a Hardy Cross Dillard Scholar and served as Articles Development Editor of the Virginia Law Review. After graduation, he clerked for the Honorable Stephen F. Williams of the U.S. Court of Appeals for the D.C. Circuit and the Honorable Theodor Meron of the International Criminal Tribunal for the former Yugoslavia in The Hague (Netherlands). He then spent three years as a litigation associate at the firm now known as Kellogg, Hansen, Todd, Figel & Frederick PLLC in Washington, D.C.

Before law school, he received a bachelor's degree from Wake Forest University and master's degrees from the London School of Economics & Political Science and Oxford University, where he studied as a Marshall Scholar.