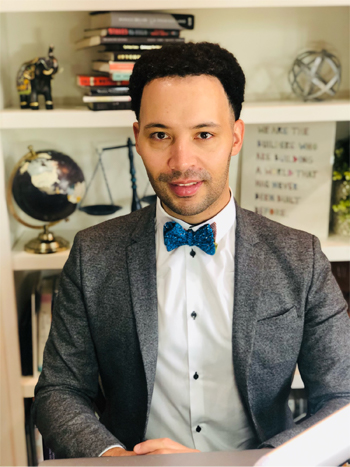 Professor Hasbrouck's scholarship and advocacy work has been the subject of much attention in national media. Professor Hasbrouck has published opinion essays in The Washington Post, The Nation, Slate, The Boston Globe, The Richmond Times, Balls and Strikes, and his work has been cited and/or quoted in federal court opinions, Supreme Court briefs, and leading scholarly and popular publications.  Professor Hasbrouck has authored or coauthored amicus briefs in federal court on some of the most important issues at the intersection of constitutional law and civil rights and habeas law.  Professor Hasbrouck is frequently consulted on litigation strategies involving civil rights and racial justice. Professor Hasbrouck is the two-time recipient of both the Ethan Allen Faculty Fellowship for scholarly excellence (2020-21 and 2022-23) and the John W. Elrod Law Alumni Fellowship for teaching excellence (2020-21 and 2021-22). He is the first professor in the law school's history to have received both awards in the same year. In addition, Professor Hasbrouck was awarded the Lewis Prize for Excellence in Legal Scholarship in 2020 and 2021.

Before joining the academy, Professor Hasbrouck worked at two prestigious law firms, McGuireWoods LLP in Richmond and Debevoise & Plimpton LLP in New York, where he drafted briefs and motions in federal and state appellate and trial courts regarding a wide range of issues including constitutional law and criminal law. Professor Hasbrouck clerked for two legendary Black federal judges-Judge Emmet G. Sullivan of the United States District Court for the District of Columbia and Judge Roger L. Gregory of the United States Court of Appeals for the Fourth Circuit.